Alligators vs. Crocodiles, do you know the difference? 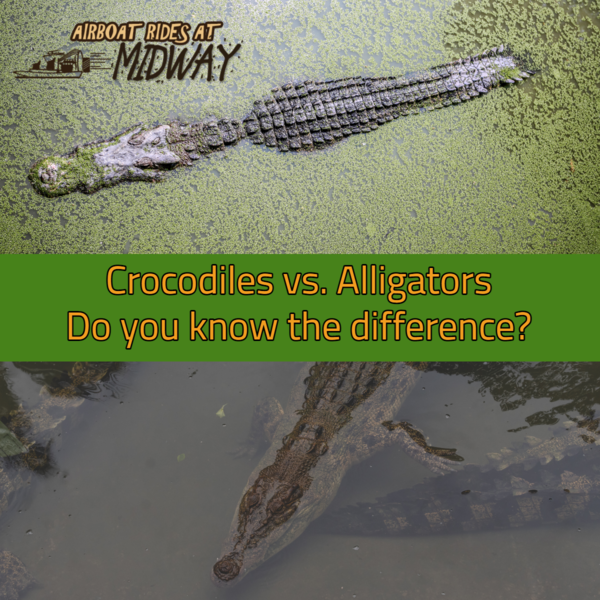 At Airboat Rides at Midway, guests can experience once-in-a-lifetime wildlife encounters while gliding on top of the St. John’s River on an airboat tour, with an up-close encounter with an alligator or two. Airboat Rides at Midway staff is frequently asked about the difference between an alligator and an American crocodile and has compiled a list of some notable differences between the two.

Alligators are more resilient to colder temperatures than American crocodiles and can be found across the southern part of the United States, going as far north as North Carolina. American Crocodiles are located mainly in South Florida due to the higher temperatures of the region. While on an airboat tour with Airboat Rides at Midway, guests are more likely to see alligators over crocodiles, as the Central Florida region can still be a little too cold for crocodiles.

Alligators are known for their U-shaped snout with cone-shaped teeth, which work better for crushing their food, while crocodiles have V-shaped snouts with sharp pointed teeth, which help tear their food. Alligators are known to eat fish, birds, and turtles, while the dietary habits of a crocodile are geared more toward bigger fish and larger mammals like deer or sometimes even humans. Crocodiles also like to spend their time together in groups, while an alligator prefers solitude.

Alligators have darker skin tones than crocodiles and have tiny black dots known as dome pressure receptors (which help regulate water pressure and detect ripples in the water) near their jawline. The dome pressure receptors on a crocodile are translucent and found all over its body. Crocodiles prefer saltwater or brackish water (a mixture of fresh and saltwater) due to a special gland that helps them expel salt from their bodies. Alligators, who do not have this specific gland, prefer freshwater found in lakes, swamps, and rivers.

Learn more about the differences between alligators and crocodiles on your next airboat tour with Airboat Rides at Midway. With knowledgeable and certified Master Captains at the helm of a USCG-inspected airboat fleet, visitors can catch alligators in their natural habitat.